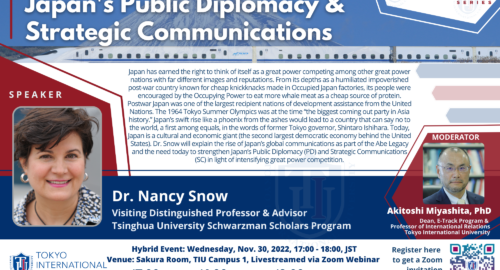 Japan has earned the right to think of itself as a great power competing among other great power nations with far different images and reputations. From its depths as a humiliated impoverished post-war country known for cheap knickknacks made in Occupied Japan factories, its people were encouraged by the Occupying Power to eat more whale meat as a cheap source of protein. Postwar Japan was one of the largest recipient nations of development assistance from the United Nations. The 1964 Tokyo Summer Olympics was at the time “the biggest coming out party in Asia history.” Japan’s swift rise like a phoenix from the ashes would lead to a country that can say no to the world, a first among equals, in the words of former Tokyo governor, Shintaro Ishihara. Today, Japan is a cultural and economic giant (the second largest democratic economy behind the United States). Dr. Snow will explain the rise of Japan’s global communications as part of the Abe Legacy and the need today to strengthen Japan’s Public Diplomacy (PD) and Strategic Communications (SC) in light of intensifying great power competition.