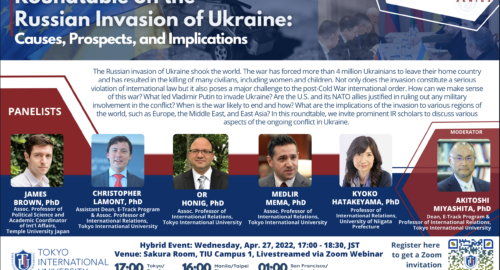 The Russian invasion of Ukraine shook the world. The war has forced more than 4 million Ukrainians to leave their home country and has resulted in the killing of many civilians, including women and children. Not only does the invasion constitute a serious violation of international law but it also poses a major challenge to the post-Cold War international order. How can we make sense of this war? What led Vladimir Putin to invade Ukraine? Are the U.S. and its NATO allies justified in ruling out any military involvement in the conflict? When is the war likely to end and how? What are the implications of the invasion to various regions of the world, such as Europe, the Middle East, and East Asia? In this roundtable, we invite prominent IR scholars to discuss various aspects of the ongoing conflict in Ukraine.