FROM 'GOLDEN ERA' TO 'SERIOUSLY POISONED': Exploring the Shifts in UK-China Relations 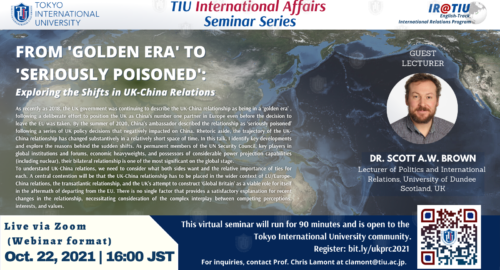 As recently as 2018, the UK government was continuing to describe the UK-China relationship as being in a ‘golden era’ , following a deliberate effort to position the UK as China’s number one partner in Europe even before the decision to leave the EU was taken. By the summer of 2020, China’s ambassador described the relationship as ‘seriously poisoned’ following a series of UK policy decisions that negatively impacted on China. Rhetoric aside, the trajectory of the UK-China relationship has changed substantively in a relatively short space of time. In this talk, I identify key developments and explore the reasons behind the sudden shifts. As permanent members of the UN Security Council, key players in global institutions and forums, economic heavyweights, and possessors of considerable power projection capabilities (including nuclear), their bilateral relationship is one of the most significant on the global stage.

To understand UK-China relations, we need to consider what both sides want and the relative importance of ties for each. A central contention will be that the UK-China relationship has to be placed in the wider context of EU/Europe-China relations, the transatlantic relationship, and the UK’s attempt to construct ‘Global Britain’ as a viable role for itself in the aftermath of departing from the EU. There is no single factor that provides a satisfactory explanation for recent changes in the relationship, necessitating consideration of the complex interplay between competing perceptions, interests, and values.

This talk is now available on our TIU Global Dialogue YouTube channel. Check it out here.